Welcome back folks to a new article, this time I decided to important thing which is to learn how to write your own shellcode. So far, the shellcode used in our exploits has been just a string of copied and pasted bytes from the web. Many hackers just depend on the internet to get their shellcode they are missing a big advantage of shellcoding which can be powerful in reading some stuff through the system like /etc/passwd and other important files.

This article has some theoretical part talking about Assembly and some requirements and then I’ll solve a problem from pwnable.tw regarding shellcoding but first let’s make some required background to advance to the next step.

First of all we will be referring to this page to get Syscalls https://syscalls.kernelgrok.com/ also you can find the Syscalls for Linux from this path /usr/include/asm-i386/unistd.h.

Assembly instruction for intel x86 processor have one, two, three or no operands . The operands can be numerical values , memory addresses or processor registers most common intel x86 registers are EAX, EBX, ECX, EDX, EIP, ESP, EBP, ESI, EDI. We use move instruction to assign values for these registers also important thing to know is that EAX holds the syscall number and the returned value from the function that we call and EBX, ECX, EDX registers hold first, second, third arguments to the syscall.

Now let’s try to write our first Assembly which is really a simple program to print hello world.

Let’s Explain the above Assembly code step by step first of all we define our string in data segment to print it out with it’s name msg and of data byte and terminate it with newline character next we will define our function called _start in the text segment. I’ll not explain the segments of the binary as they are not our focus in this article.

Now let’s dive into the Assembly first of all we will move the syscall for write function to EAX register remember what we said earlier now the argument if you take a look of what are the arguments of the write function from the manual page   write(int fd, const void *buf, size_t count); so it takes the first argument the file descriptor, address to the buffer and the buffer size.

Now it’s obvious first of all we move the STDOUT file descriptor to EBX, next we move the address of our message that we want to print out to ECX finally we put the size of our message into EDX which’s in our case 14 bytes , and call int 0x80 which will interrupt the system to make a system call to write function .

This was a very simple Assembly code that will print hello world to STDOUT as seen in the above output.

Now let’s dive into writing in shellcode we will break into steps.

Removing Null bytes, In order to write a successful shellcode always remember that null bytes are not good and you have to get rid of them somehow there’re some methods out there to remove null bytes from your shellcode and I’ll explain some of them. As you might already know in 32-bit machine the structure of the registers loo like the below picture 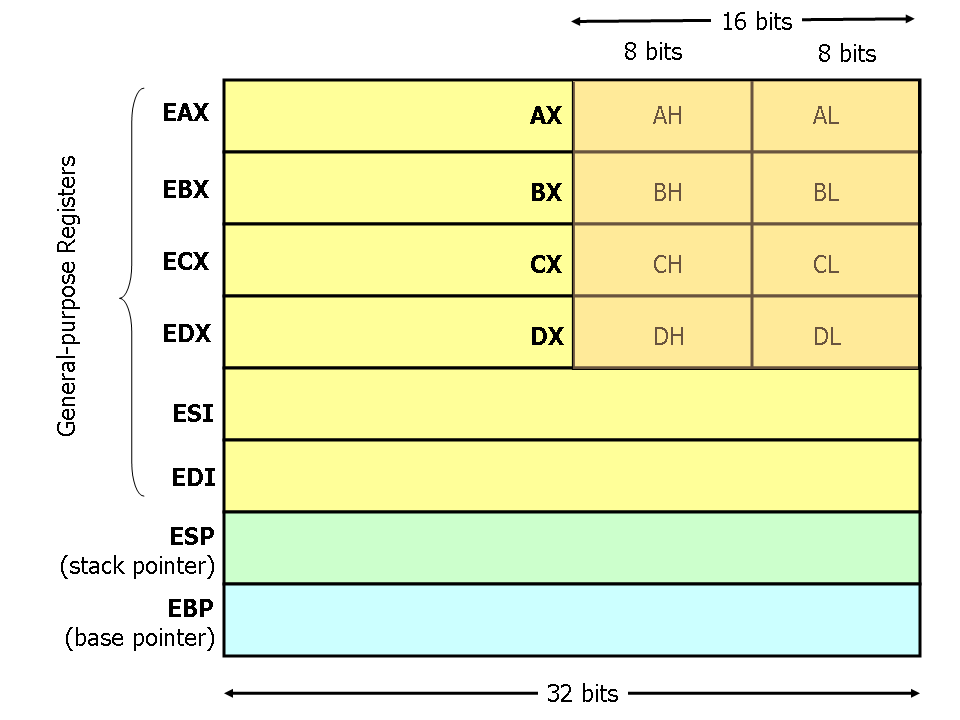 So If you consider the following mov instruction example:

Using the AL, BL, CL, DL register will put the correct least significant byte into the corresponding extended register without creating any null bytes but the problem here is that the top three-bytes could contain any value. If you come across a digital logic course and you’re familiar with logic gates you should remember the XOR gate i’ll give you a quick refresher on it.

So now consider our situation if we xor a register with itself we will zero out it’s value.  Let’s write the last version of our shellcode and try it.

First we will assemble this by issuing this command on my kali.

It should work if it doesn’t try to debug it by GDB to know where you are wrong.

Now time for an exercise from pwnable.tw called orw which stands for open read write to get our shell code.

This how the binary looks from ida decompiler

And as the challenge stated we can read the flag from /home/orw/flag so first of all we need to open the flag then read it then write it to STDOUT.

So let’s push the value to the stack in little endian manner next we will do the same procedure as before xor the registers and use them as required for the function that we are using.

Let’s explain some concepts before we craft our shellcode as said above first we pushed the path in the stack remember how stack work in intel x86 it grows towards lower addresses , then I set-up the EAX register with the appropriate syscall and moved the copy the memory address where ESP is pointing to EBX as open takes it first argument the file we want to open. The next is the same concept (remember that the returned value is stored in EAX)

Now if we feed it to the challenge we should get our flag.

Thanks for reading. I hope you learned something new.